In the first instalment we looked at the controversial beginning of Vince McMahon’s World Bodybuilding Federation. The WBF promised to revolutionise the way bodybuilding conducted itself and when June 15th was chosen for the first ever WBF show, people waited anxiously to see what would happen. 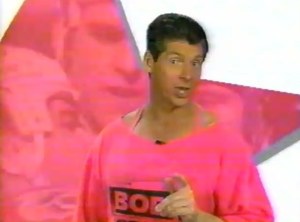 In the build up to the show, crossovers between the WBF Bodystars and Vince’s WWF became more and more common. Indeed during WWF programs it was commonplace to see whole segments dedicated to the Bodystars discussing their workout routines. One particular bizarre publicity stunt saw a team of wrestlers face off against the Bodystars in Family Feud. Coupled with this, ahem ‘brilliant’ marketing, Vince’s supplement line, Integrated Conditioning Program, was blazoned throughout arenas in the US when the wrestlers were in town.

It was during this time that Vince’s vision began to become apparent. He wanted the Bodystars to develop over the top identities and personas similar to the WWF wrestlers. Unsurprisingly, Tom Platz’s previous comments that the WBF would not be turning into professional wrestling were repeated sarcastically in bodybuilding circles.

As the event drew closer it became apparent that viewership numbers for the pay-per-view Contest would fall far below what McMahon had hoped for. In a bid to drum up further support Vince employed Regis Philbin to host the event and appointed the WWF’s Bobby ‘The Brain’ Heenan as co-host. Heck Vince even hired former Bodybuilder Don Draper to be a judge.

Sadly promoting the WBF to a mainstream audience proved to be tough and when the contest kicked off on June 15th, it seemed destined to fail. 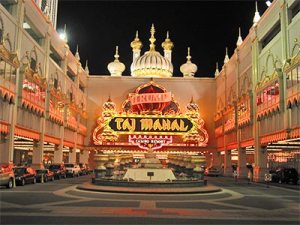 When bodybuilding enthusiasts stepped through the doors of the Taj Mahal Casino on June 15th few knew quite what to expect. Much had been made about Vince’s knew vision for bodybuilding and when the first competitor hit the stage, muscle fanatics got their first taste.

Loud music, pyrotechnics, smoke screens and beautiful women, the WBF was a marked change from the IFBB. Accompanying the bells and whistles was the Bodystars each with a unique nickname and character.

The WBF format was much the same as other competitions with the first two rounds comprising of the mandatory poses and the individual posing routines with the third round being where the magic happened. Called the ‘Entertainment Round, it comprised of pre-taped themed videos that spilled onto the stage. Take Danny Padilla’s routine which was inspired by Jack and the Beanstalk. It featured a pre-taped video of Danny as Jack being chased by the Giant, followed by Danny being chased around by the Giant on stage. Remarkably it wasn’t the most bizarre routine in the Entertainment Round. Heck check out Jim Quinn’s futuristic posing routine

Another video saw Berry Demey playing roulette in a tux in the Trump Casino in front of a beautiful woman. Following some flirtatious chatting between the pair the woman gave the muscle man the key to her room. The next scene saw Demey enter the woman’s room as she began to undress before the bodybuilder remembers the WBF show and runs on stage, still in tux, to complete his posing routine. When Demey left the stage, the video began again, this time with Demey ending up in the woman’s bed. Vince’s line about ‘bodybuilding the way it was meant to be’ unsurprisingly became something of a mockery.

Bells and whistles aside, it became clear early on that WBF bodystar Gary Strydom was the frontrunner for the top prize. When the blond muscle man came out, fans were told “You’ve seen the rest, now get ready for the best”. Impartial it was not. Gary’s final performance during the entertainment round even saw him come out in a top hat with a cane adorned by beautiful woman.

When guest judge Don Draper began to consult with his fellow judges, fans expected Strydom to take home the title and they were not to be disappointed as the Strydom took home the top prize. A huge prize at that with the $275,000 total prize money representing the biggest ever prize fund in a bodybuilding competition.

Unsurprisingly Vince was a confidant man following the show

Despite it’s generally positive reception, the WBF contest did come under attack from certain quarters as critics noted that the top five athletes all placed in the WBF show. Even more suspiciously, the highest earner had come first, the second highest had placed second and so on all the way to 5th place. This led to accusations that Vince was trying to fix bodybuilding outcomes in the same way WWF matches were predetermined.

This was spurious for two reasons. Firstly, Gary Strydom’s conditioning was by far and above the best. Indeed many believe that he could have given that year’s Mr. Olympia a real run for his money. Secondly many of those accusing Vince of fixing the outcome were strongly associated with Joe Weider, a promoter not immune from accusations of tournament fixing lest one forget the farcical 1980 Mr. Olympia. Something that seemed to give weight to the fixing accusations was the fact that the prejudging rounds had been closed to both the press and the public. This led some people to claim that the pre-judging never even occurred, a vicious rumor that was later disproven.

The WBF show had introduced a lot of new concepts to bodybuilding, some of which were undeniably good for the sport like bigger prize funds for the athletes. Other concepts were perhaps not so good like characters for the bodybuilders and the pre-taped videos but at least the WBF had tried something new, something that could have brought bodybuilding outside of its niche sub-world into a wider genre.

At the very least, the first WBF show had gotten the wider sports world talking. So in one sense it was successful as after all that was what Vince and Platz had wanted in the beginning. Sadly, the viewership figures had been seriously below projections which meant only one thing, the next WBF show for 1992 would need to be even bigger, better and bolder.

Sadly fortunes drastically changed for the new bodybuilding federation in the 12 months following the June 15th show with drug accusations, out of shape athletes and bad publicity bringing the WBF to its knees.

But that’s a story for the third and final part of our instalment.