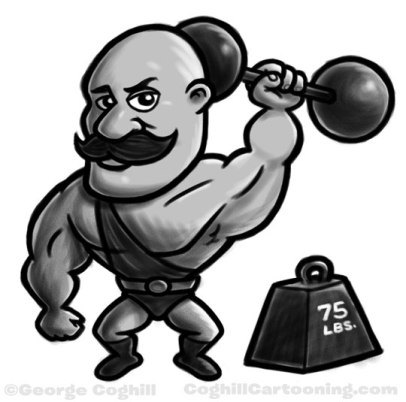 As Jan Todd noted in her article on classical fitness systems, physical culture historians have tended to devote their attention to the latter half of the nineteenth-century and beyond. This has, perhaps unsurprisingly, led to a dearth in materials on the forbearers to modern strength training and strength sports.

Weightlifting, as we well know, is a millennia old tradition, practiced by warriors, athletes and lay trainers for a variety of reasons. Owing to the difficulty in finding accurate sources however, the historian is often left frustrated in their efforts to track down famous figures from the past. Indeed, most work on early 1800s strength training is the result of persistence and luck.

Today’s post on a Mr. Thomas Thompson, an early English strongman is entirely the product of luck. Though almost untraceable in the secondary literature, Thompson’s feats of strength, if true, were remarkable even by today’s standards.

The following source on Thompson comes from the January edition of Chamber’s Journal:

On March 28, 1841, Thomas Thompson lifted three barrels of water, weighing together 1,836lbs. He also put an iron bar on his neck, seized hold of its two ends and bent it until the latter met.

On another occasion he raised with his teeth a table 6ft. long, supporting at its furthest end a weight of 100lb. He also tore without serious effort a rope of a diameter of two inches and lifted a horse overhead.

Although the extract ends quite abruptly it certainly piques the interest. Was this Thompson actually the famed Thomas Topham, whose strongman feats fascinated the writer J. T. Desaguliers? Or was this an entirely different man who lived during the same time?

More research is needed on this point but suffice to say that the human desire to lift heavier and heavier weights is not a modern phenomenon!

iThere are no comments