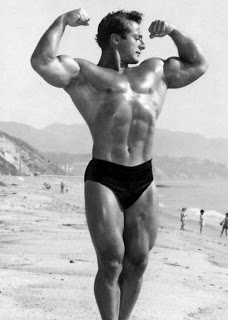 Our latest post comes from the wonderful and talented Samantha Olivier from Ripped.me. We’re delighted to have Samantha featured on the site again and know you’ll enjoy her latest piece.

When you live and lift in a world where bodybuilding has been reduced to supplementation, cutting workout time in half and putting size before health, you become hungry for this noble sport’s true roots. And where better to look, than to the legends of lifting, to beasts such as Leroy Colbert and the gentleman from the title of this article who were and still remain at the forefront of the sport?

This was a time when the basics were not only appreciated, but used to achieve incredible results, and physiques that we dream of to this very day. Without further ado, let’s take a glimpse into the training kingdom of the man who was Mr. America in 1948, Mr. Universe in 1962, worked alongside Arnold Schwarzenegger, and trained the likes of Sylvester Stallone.

Take a quick look inside any contemporary gym, and the predominant pattern you’ll see is young enthusiasts pushing for their 15-rep bicep curls and then go home. But what they fail to realize is that such a narrow-minded approach cannot lead to lasting results. After all, there is only so much weight you can lift in that rep-range, and the Iron Age bodybuilders, with George Eiferman in the leading ranks, knew the importance of lifting heavy for muscle growth and strength.

His go-to three-day split was based on 11 main exercises that targeted the entire body and remained in the sweet spot of 7 to 10 reps. And in addition to a great focus on full-body movements such as the hack squat and bench press, there is a whole range of accessory work that puts your entire body under loads of pressure. You will feel muscles you didn’t know existed at all.

Mr. Universe was a man who loved his strength. And since he joined the navy during World War II, it’s no wonder that he appreciated the practical, useful aspect of weightlifting, hence his constant focus on purpose over mere appeal.

Follow in his footsteps and design your routine to give your body enough strength (and then some) to cope not only with everyday motions, but endure greater challenges and be your main weapon of choice in emergency situations. Don’t use the gym as a means to a beautiful body alone, but a means to a better functioning, stronger body that will age well.

Modern lifters like their extremes. We have exceptionally powerful men in strongman competitions who potentially have massive imbalances in their major muscle groups, and we have “shredded” bodybuilders who have never done a single squat in their life.

Old-school bodybuilders always valued their muscular size, but they never allowed their symmetry to suffer as a result of chasing greater strength in certain movements. As a remedy and a way to prevent strength imbalances and muscular asymmetry, they used complementary and diverse gym equipment to target and isolate muscles properly, and ensure proper form in the compound movements under heavy loads.

When you imagine the bodybuilders from the 40’s and all the way to the 70’s, you probably see the clear outline of their narrow waists and massive chest and shoulders as their “signature” look. This visually spectacular physique still worked to the benefit of gaining strength, despite many modern fitness coaches claiming that heavy deadlifts and other compound movements that require an exceptionally strong core (so, all of them) lead to a thick waist. Have you ever seen Frank Zane or Steve Reeves?

If you wish to acheive a similar effect, first of all, never underestimate the power of the good old vacuums. They are the pivotal exercise for the entire midsection, and an old-school favorite many modern lifters fail to include in their workouts. One look at Mr. Eiferman, and you’ll know he has mastered his vacuums to perfection.

Focus on the negatives

Every lifting sport counts the concentric movement of the lift as the one that makes the rep a success or a failure. As a result, we see modern lifters focus exclusively on how much they can pick up and not at all at how difficult it is to lower the same amount of weight. In the age of George Eiferman and his fellow bodybuilders, and especially in the 70’s, they used the eccentric portion of the movement to achieve better engagement of their muscle fibers.

They specialized in negative-only dips and chins, leading to incredibly muscular arms and even greater grip strength than you’d see in a contemporary lifter. Combine this unorthodox approach with Mr. Eiferman’s favorite deadlift holds and pinch grips, and you will finally understand how this powerful generation of lifters achieved such size and strength in their upper body.

The forgotten art of bodybuilding based on the iron age basics and inspired by George Eiferman and his peers remains the timeless, unsurpassed ideal so many young lifters have yet to conquer, and a set of values we should forever strive to honor.